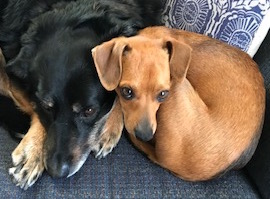 Our dog peed on (really into) my son’s backpack some time over the weekend.  We discovered it as we were pulling out of the driveway to head to school.

Back into the house we went to unpack and sanitize what we could, transfer the contents of his bag, and throw the stinky backpack in the washing machine.

I am unusually grateful today that the events we remember this week, leading to Jesus’ death and resurrection, are not reliant upon me.

“Jesus said, ‘You now have sorrow, but I will see you again and your heart will rejoice and your joy no one can take from you.’” (John 16:22)

And my heart will rejoice.  And my joy won’t be taken away from me.

William Barclay wrote, “The joy the world gives is at the mercy of the world. The joy which Christ gives is independent of anything the world can do.” (The New Daily Study Bible, The Gospel of John, Volume Two, p. 231)

It gets harder to look at

Happy Holy Monday, everyone.  Keep your eyes on Jesus, and keep your backpacks off the floor.

Poor Peter honestly believes it, too.

Peter has been at Jesus’ side since the beginning. Bewildered at times, yes, but boldly proclaiming his Friend as his Savior again and again. Peter trusts Jesus END_OF_DOCUMENT_TOKEN_TO_BE_REPLACED

I have set you an example that you should do as I have done for you.  Very truly I tell you, no servant is greater than his master, nor is a messenger greater than the one who sent him. Now that you know these things, you will be blessed if you do them. (John 13:15-17)

“You think you’re so high and mighty.”

Circa 1978, these were fighting words at Frances J. Warren Elementary School. I have no idea how a bunch of south side kids in Tucson, Arizona, managed to adopt a phrase that I have since learned originated in medieval England.

A kid who took charge of a game on the playground:  “You think you’re so high and mighty.”

A kid who did well on his schoolwork:  “You think you’re so high and mighty.”

A kid who maybe did have the temerity to suggest that maybe we shouldn’t be digging up the school landscaping during lunch hour:  “Oh, you just think you’re so high and mighty.”

My neighborhood was poor. Poverty made us suspicious of authority, even our own, even each other’s. And we saw its abuses behind every bush.

Jesus got up from the table at which sat the men who would lead his movement after his death. He would give them his authority. These would be his leaders, and so, he said, “I have set you an example that you should do as I have done for you.“

The example? To kneel, to serve, to be humbled.

There’s a common misconception in the church that we are elevating ourselves by asking of ourselves, as leaders in the Body, to try our best to live holy lives. We hold ourselves accountable, so we can hold others accountable, and we expect the people of the church to do the same for us.

I don’t know how to eliminate this misconception. Maybe you don’t have to be poor to be suspicious of authority. Maybe it comes naturally to us all.

“Oh, you think you’re so high and mighty,” we hear, when in fact nothing could be further from the truth. True leaders are asked to lower themselves, to submit to one another in mutual love. That’s authority, rightly exercised, in the name of Jesus, our example.

By this everyone will know that you are my disciples, if you love one another.
John 13:35
DailyVerses.net