This is the transcript from a weekly v-blog posted to the Facebook page of the First Presbyterian Church of La Junta, Colorado.

“You get what you get”

My daughter was not an easy toddler. Or preschooler. Or youngster, for that matter.  But let’s start at the beginning.

At her first preschool, at the age of 2, she staged what her teachers called “the great candy raid,” involving several children in the scaling of a half-wall, into a storage area of their classroom, during naptime. The teachers complimented her on her leadership and organizational skills before calling the school psychologist, whose advice to us amounted to, “Good luck with her.”

At her next preschool, she exhibited a similar lack of remorse for wrongdoing.  Sent to the director’s office for some wrongdoing and told to sit against the wall, she managed to  find a spare thread and began unravelling the carpet, row by row.  By the time the director returned, a decent sized square of her office was down to the padding.  It wasn’t pretty.

At her third and final preschool before beginning kindergarten, we registered her and then waited for the phone call.  And waited. And waited.  Finally, after about a month, I approached the new director.  “Any problems?”  She looked at her curiously.  No.  “Really?”  No.  “You haven’t had any problems with her?”  No.  I explained some of the problems she’d had at the other preschools.  The director looked at her surprised.  “No, no.  She’s fine. We just tell her, ‘You get what you get and you don’t throw a fit.’”  The director shrugged. “That’s all it takes.”

It worked on my daughter, because it was clear and predictable.  No negotiation. No room for response. No so-called love and logic.  An eye for an eye.  A tit for a tat.  Period.

This is human reason at its simplest: cause and effect.  But, as David Hume was quick to point out long ago, the effect we predict is not necessarily, well, necessary.  Our ideas of cause and effect are formed by habit, largely, rather than real observation or experience.

I’m digressing a little bit, and you’re wondering where this is going, so let me just cut to the chase and show you what I’ve been ruminating on, several times, during this coronavirus quarantine.

Here it is, in the form of a meme I found on social media this morning, though it’s been forwarded to me several times in different media. 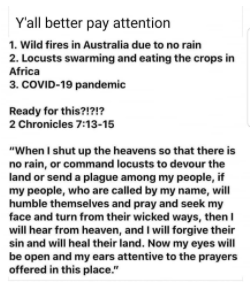 It’s simple cause and effect:  We’ve been wicked, so God is punishing us.  If we humble ourselves and pray, God will bless us.  It’s “you get what you get and you don’t throw a fit” taken to a cosmic level, right?  But does it hold up?