Larry and his parents were lifelong members of our church. Larry and his father were ruling elders at one time. That’s not to say, though, that they were pillars of the church. Perhaps crumbling pillars, but not pillars in that legends-of-faith sort of way. I’ll explain.

Larry got into trouble with drugs back in the 1970’s. He was arrested a few times and then got clean. Some brain cells were lost in the process, but he was still likable, functional, and kind. He stayed clean for decades. That’s when I got to know him. 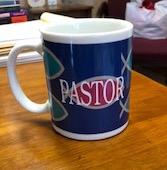 One particular day, I saw him pull up and mentally protested. “No, not now, Larry. Not now. I’ve got work to do. Not today, Larry. Ugh.”  When he arrived at my office door that day, though, he didn’t linger. Instead he stopped only long enough to hand me this mug.

Some time, about six or seven years ago, a man got kicked off the train as it stopped here at our depot. It happens. Passengers get sick or rowdy, and the conductors kick them off. We get them. We send them on, and all is well.

This man they kicked off stayed. And he found Larry. He got Larry back on drugs. Something in Larry snapped. Several of us from the church tried to intervene. Larry took a swing at one of our guys, and I cried. Larry wasn’t Larry any more.

The man from the train eventually left. Actually, I heard a story that one of our sheriffs loaded him up and drove him to the next county. Whatever. He was gone. Larry was still here, though, and deeply in debt. The city turned off his utilities four years ago for failure to pay. Larry could have pulled together the money to pay, but he shook his fist at them instead. “I’ll show them,” he must have thought. He did show them. He showed us all what it looks like to slowly die in a house without heat, electricity, or running water.

At one point, the church set up a tab for him at a local cafe, so he could at least have one hot meal a day. It worked for a while, until the day Larry ordered a cup of hot water and then proceeded to pull out a razor and use it to shave at the cafe counter in front of the other diners. That was the end of that.

He had to have several toes amputated for frostbite last winter. Again, we tried to intervene. Let us find you a place to live, Larry. No. His brother in Denver tried to help. No. Could we have him declared incompetent? No. Will you accept our help, Larry? No. Is there more we can do? No.

Larry lasted longer than any of us thought he would. Maybe we lulled ourselves into thinking he could survive this way. No.

On Tuesday, someone called 911 for him. The paramedics found him too far gone. He lived a few more hours and died that afternoon. At least he was surrounded by people. At least he was warm. I’m grateful for that.

We don’t know when we’ll ever gather for a proper funeral. This may be the only eulogy I ever give for him.

Thank you for the mug, Larry, and thank you for your friendship. I’m so sorry I could not do more. I’m so sorry you suffered. Rest in peace now, and may the angels attend you where there is light and peace forever. 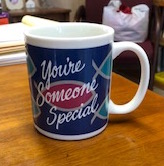