The news of Eugene Peterson’s death this week re-started an old conversation I’ve had with myself over the years—a conversation about ministry, and expectations, and grace.

[If you’re unfamiliar with Peterson or know him only for The Message, you’ll find his obituary here: https://www.christianitytoday.com/news/2018/october/eugene-peterson-died-message-bible-long-obedience-resurrect.html He wrote a number of important books aimed at American Protestant pastors.]

I’ve given away most of my multiple copies now, and the ones I kept are underlined and sticky-noted, and at least two of them are missing pages. It’s ironic, really, given the fact that I stopped reading his books on pastoral ministry for the better part of 10 years, when I came to resent the work he offered.

Peterson offered a vision of pastoral ministry that was rooted in Scripture and story, seeped in the language of biblical theology and contemplation. It was a vision of pastoral ministry that assumed a calendar that was open to the Holy Spirit’s leading and a pastor’s study whose door was often closed so that its inhabitant could focus on the Word of God and prayer. It was and still is a beautiful vision.

It was a vision, however, that assumed a lot about a pastor’s responsibilities, both at home and at church. To put it bluntly—or as I put it to my therapist a few years into ordained ministry when I honestly thought I might be having a breakdown—it was a vision for “men and childless women.”

I don’t remember any story of his being called out of his study to attend to a daughter puking into a garbage can in her first grade classroom. I don’t recall his ever having a child in his office during prayer because the child’s daycare center had burned down when the light over the fish tank shorted out. If he ever fell asleep during a pastoral visit because he’d been up twice overnight pumping breastmilk, well…I’m pushing this too far. You get the idea.

I very clearly remember coming across an article in which Peterson recounted time spent hiking with his wife on his day off. In the particular article, he described hiking on the Monday after Easter. It was just past Easter for me, too, so I read on.

“A hike?” I thought to myself. “A hike with my husband?” Well, first of all, he would have had to take the day off from work. Even if he had, though, I was so exhausted that I was physically ill. I still had a band-aid on my hand where I’d cut myself the week before sewing my daughter’s Easter dress. I’d pulled an all nighter before Easter worship to make sure the sermon was ready and the Easter bunny had duly delivered and hidden enough candy corn and jelly beans. I’d baked the ham and the green bean casserole, dyed the eggs, and taken the multitude of photos that the grandparents would expect in the mail by Thursday at the latest.

I realized that day that reading Peterson’s work made me feel bad, unfaithful, and incomplete as a pastor. I do not believe he intended such a reaction at all, but there it was. When in fact I was simply a minister and a mother, doing the best I could with the time I had, I felt like a complete failure reading his stories. 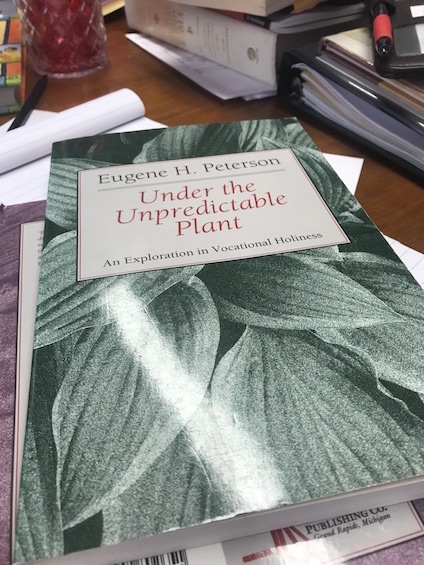 In a moment of absolute clarity and surprising self-care, I put away the article and all of Peterson’s books. Only recently—with my children in high school and relatively self-sufficient—have I picked them up again. They work for me now. I have time.

Peterson’s vision of ministry is a compelling one, but it’s not the only one. It assumes a level of privilege that I did not possess for much of my early career. He was right about so much. We do need to read deeply, listen intently, and close our doors now and then. I honor him, but I don’t recommend him first for anyone, male or female, juggling the demands of parenthood and ministry. Save him for later, I tell them. Read Tish Warren now.

At a training event in 2008, I sat with Peterson at lunch. At the time, I was struggling to help a whole slew of adult new believers in my local church to grow in their relationships with Christ. How did he disciple new believers in Bel Air?

He shrugged. “I took them to my office and talked to them. If they wanted to, they’d join the church.”

Anything else? Any classes? Any resources?

He was hungry, and I was bothering him.  “No,” he shook his head.

Okay then. He was as unhelpful in person to me that day as he’d been in his books, but then maybe that’s the point I’m trying to make. There’s no single way to be a pastor, any more than there’s a single way to be a spouse or a parent or a friend. We’re all making it up as we go along. Some ways are better than others, in different places, in different seasons, and for different people. The way that worked for Peterson didn’t work for me. The way that works for me won’t work for you.

It’s taken me 20 years in the ministry to learn that our expectations of ourselves matter more than any measure imposed by the world. Even now, I sometimes forget.

Be gentle, I say, to ourselves and each other. Grace abounds.