The mythologist Joseph Campbell described the quest as the hero’s journey out from the ordinary to a place of adventure with the hope of magical rewards. It sounds fabulous. Until it’s not.

I’m currently on a quest for a personal retreat day. It’s not nearly so heroic as what Capbell described. Magical rewards? No, I just want to find a place where I can spend the day away with Jesus for prayer and journaling. A place without ping pong. Ping pong?

My quest is not going well. But first, a little background–

I lived for eleven years in St. Louis, and I spent 8 of those years in some kind of vocational ministry. For my own spiritual care and sanity, I frequently took personal retreat days. There were plenty of places in the area that would give me keys to a room for a day and a hot lunch for a reasonable price. The Sisters of Mercy had a lovely retreat center out on Geyer Road. I spent some days at the Thompson Center before the Episcopalians sold it. These retreat centers were close to home and gave me just a day away.

I live in rural Colorado. I’m two hours away from the closest thing resembling a retreat center. Any time apart requires an overnight, and those were hard to accomplish while my kids were younger.

This year, though, slogging through COVID stress, I renewed my search for respite. One child is off at college; the other is nearing adulthood. Overnights are do-able now. I set out in January for my first day apart in (drum roll please) in 17 years. 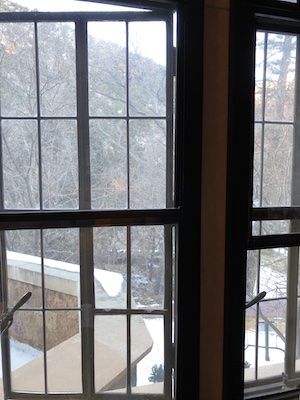 With Ruth Haley Barton’s An Invitation to Solitude and Silence in hand, I booked a room at Glen Eyrie. So lovely, so beautiful, so expensive. I did have a great dinner, and the space was quiet. The problem is that Glen Eyrie operates essentially as a hotel. I couldn’t check in until 4, and I had to be out by 11. Make that 10, when housekeeping started to vacuum. Actually, make that 10:30 when housekeeping knocked on my door to ask if they could get me anything, i.e. “When are you going to leave so we can finish cleaning this floor?” I got the idea and packed out.

Not deterred, I tried again this month. I booked a room at the Holy Cross Abbey in Canon City. It’s closer and much less expensive. The reservation came with caveats.

“The cafeteria will be closed.” Okay. I’ll pack in. “We’re going to house you in the same dorm with a Mennonite group on retreat….They should be quiet.” All right?

No, it wasn’t all right. The Mennonites brought their children. Small children, whose childcare space was set up in the common area just outside my room–my room, which was adjacent to the main entrance from which the kids kept running in and out, in and out.

I stared down at my Invitation to Solitude and Silence. I wasn’t finding either.

I walked over to the Abbey, where the office staff were sympathetic and gracious enough to let me set up in one of their conference rooms until they went home for the evening. It was quiet. I prayed. I journaled. I took a tough phone call I’d been praying about. All good.

Then I went back to my room. The Mennonite children and their parents were occupying and socializing in the common space just outside my room. Then they started playing ping pong. Yes, ping pong.

I packed up and came home.

What did Campbell say about the thwarted quest? He didn’t really, but he described the fate of someone who refuses the adventure they’d been called to make, and it isn’t pretty. He uses words like “wasteland” and “death” and “disintegration” (59).

I hope not. I’ll check back in June when I’m scheduled to try again. No vacuums or ping pong this time. I hope.