I spent the first twelve years of my life in a double wide. I never questioned it. It was my house. It was the same as all the other houses in the neighborhood…so, yes, we lived in a trailer park. It was a nicer trailer park, as trailer parks go, with larger than average lots; many of us had put additions on—porches and such—but frankly it was still a trailer park, cheerily named “Sunkist Acres” by developers in the late 1960’s.

It took me a while to figure out that there were some people who looked down on trailer parks. It’s when I first heard the term “trailer trash.” Huh? I was confused.

Later, I found out that it wasn’t the trailer parks themselves that people were looking down on, but the incomes and status of the folks who lived in them. Stereotypes abounded.

All of us are born somewhere. All of us call a place home. Every place has its limitations, but no place need define us.

“On the day that the Lord God made the earth and the heavens,” He formed man from the dust of the ground and breathed life into him. “And the Lord God planted a garden in Eden, in the East; and there he put the man whom he had formed.” (Genesis 2:8) 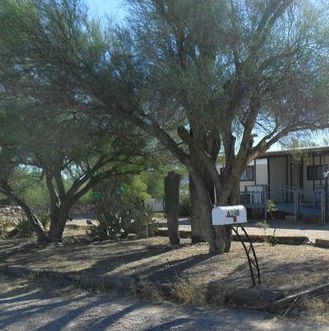 God put Adam and later Eve in a garden. But even the garden had its limitation: “You may freely eat of every tree of the garden; but of the tree of the knowledge of good and evil you shall not eat, for in the day that you eat of it you shall die.” (Genesis 2:16-17)

Even in the garden, there was one thing they couldn’t have, so, of course, it was the one thing Eve wanted.

Trailer parks come with their limitations.   Oh, how I always wanted a basement or a second story. I thought stairs were cool! I remember walking up and down my hallway pretending that I was climbing up and down a flight of stairs. Why? Well, I suspect, because I couldn’t have them. It was human nature straight from the garden.

What God wanted Adam and Eve to learn was trust. God provides. God supplies. Yes, location comes with limitation, but God will never leave us in want.

In Sunkist Acres, the real limitation—the reason we lived there in the first place—was money, of which our family had little. There were some opportunities—camps, classes, trips—of which I just couldn’t take advantage as a kid. So be it. God gave me the gifts I needed earn good grades and go on to the university. God never stopped providing for me, and I learned to trust Him in Sunkist Acres in ways I would not have learned elsewhere.

Over the years, I’ve heard the youth in our small community, and a fair number of adults, lamenting what they perceive as a lack of opportunity. Small communities and rural communities come with their limitations, of course. We can pine for what we want, or we can trust God to give us what we need. It’s our choice.

When the apostle Paul came before the Areopagus, he declared:

He (God) allotted the times of their existence and the boundaries of the places where they would live, so that they would search for God…(Acts 17:26-27)

Did you get that? God set “the boundaries of the places where they would live” so that we would search for Him. Just like he placed Adam and Eve in the garden, God placed us here in our small town, limitations and all, perhaps so that we will search for Him here, too. And find Him. And trust Him.