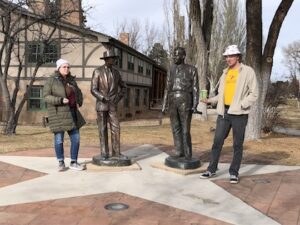 The Bethe House was otherwise empty apart from my family, so the docent struck up a conversation when he saw me paying attention to Frederick Reine’s 1995 Nobel Prize in Physics on display. “I was one of his graduate assistants,” he told me, and our conversation began.

We talked on many topics–from Colorado geography to the weather–but we seemed to come back several times to what was really a theme of the museum and the laboratory: the role of Los Alamos in deterring further nuclear warfare.

Earlier that morning at the Bradbury Science Museum in town and now again, we’d watched, listened, and read statements from scientists, engineers, and their families as they insisted again and again that their presence and continued research was the very reason why no further bombs had dropped since 1945. NATO? The United Nations? Others might like some credit for that detente, but the message of Los Alamos was clear. We are the safekeepers of peace.

When the docent made the same claim, I paused. “I suppose it’s only true,” I commented, “if all the leaders care about their people. Somebody like Putin doesn’t seem to care.”

“Well,” the docent replied begrudgingly. “Up until this year, I’d have said the chance (of nuclear warfare) was infinitesimal. Now, not so much.”

I nodded. “In my field, we call that sin.” The docent laughed, and we went back chatting about other less ominous topics.

There’s that great line in the movie The Martian. Once the astronaut Mark Watney realizes just how dire his situation is, and he quips, “I’m gonna have to science the sh*t out of this.”

The problem is, of course, that we can’t science our way out of sin. We are frail, fragile, shortsighted and selfish people, not all the time, but often enough that our decisions are rarely made in the sight of all the implications they might have. This is not a judgment of human nature. It’s simply a description, well supported by the evidence of history over millennia.

Neither the scientists and engineers at Los Alamos nor any policymaker or leader will ever find a way out of sin. That’s the work of grace: the grace of God extended to us in Jesus Christ and then extended to one another in decisions made out of love and charity.

I suppose what I saw most lacking during my visit to Los Alamos was a healthy dose of humility to recognize the limits of human effort. I don’t know what a museum exhibit on humility would look like, but it would sure be refreshing.